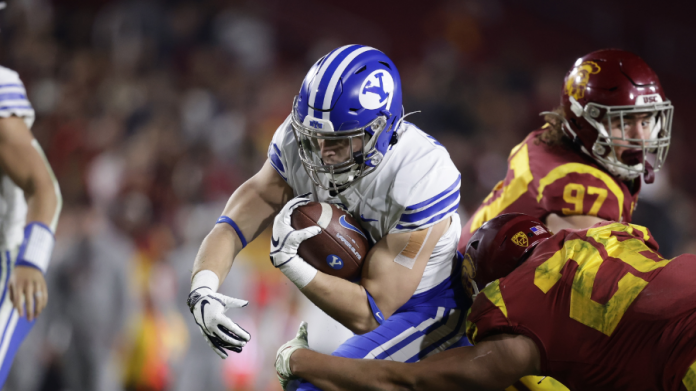 As the dog days of summer blaze on and a new season approaches, we look at the breakout candidates in each conference:

The 2019 4-star recruit flashed in his limited opportunities last season, catching 14 passes for 208 yards. A great route runner and play maker after the catch, look for Thompson to improve these numbers, as he rises up the depth chart and continues to add size.

Thomas only received a heavy workload in two games last year but made the most of them, rushing for a combined 254 yards against Syracuse and Georgia Tech. The explosive back appears to be number one on the depth chart after spring camp.

• Thomas was a bright spot last season for the Hokies. As a Freshman in 2021 he rushed for 440 yards 3 Touchdowns and caught 2 passes for 33 yards. pic.twitter.com/lEZWB5ry6c

Wisconsin is known as one of the biggest offensive line factories in the country and Nelson may very well be the next prized product. At guard, he earned all-conference honorable mention last season, starting all 13 games. However, Nelson will likely slide into the tackle spot next season, his most natural position that earned him a first round projection out of high school by some.

The one thing we know is this man has talent. Wease was a Top 10 recruit in the country, but played sparingly in his first few years before suffering a season-ending injury in 2021. Now, the senior wideout is projected to start. His frame and ability to win jump balls aligns very well with the playing style of quarterback Dillon Gabriel.

The last time we saw Theo Wease he was running free on the Gator’s defense. Can’t wait to see him healthy and making big plays again! pic.twitter.com/Iucm5kBl3r

We saw what Joseph was capable of in the last game of the season, where he turned his first career start into 105 yard performance, and earned his first career touchdown. FIU’s offense is largely predicated on utilizing backs in the passing game as well. As a returner, receiver, and ball carrier, Flex has untapped NFL potential.

In 2021, Finn’s third full year in the Toledo program, he was extremely efficient, causing his snap count to increase down the stretch. Although he was occasionally inaccurate, he finished the season with 12 touchdowns and just one interception. Carter Bradley, who split time at quarterback last season, has transferred out, so it is now entirely Finn’s team.

Dequan Finn rushes in for the TD and just like that @ToledoFB is up 21-10. pic.twitter.com/YvELWNOUm7

Tight ends are a staple in a San Jose State offense and Olson is expected to step into the starting role. He is slightly undersized for the position but plenty explosive. In his first two seasons, Olson has ran 73 routes and 174 yards (2.38 Y/RR), adding 2 touchdowns.

Naturally, Victor is an underdog. The 5’9″ athlete was unranked out of high school and attended Hawaii as a walk-on. After transferring to Washington State, Victor was put on scholarship this offseason. He is primed to see playing time as a slot receiver, after the two in front of him on the depth chart graduated. Victor 296 yard, two touchdown season.

Freshman Lincoln Victor with his first career TD. They grow up so fast! 👏 👏#HawaiiFB pic.twitter.com/uS5thp2jqN

Zierer seemingly won the left tackle job this spring and is on the radar of NFL scouts. At 6’7″, 312 pounds, he aligns perfectly with some of the top drafted tackles this past April. In three starts last season, he allowed just six pressures and zero sacks.

Lee played very sparingly at Virginia Tech, but transfers to the Group of Five this offseason in hopes of greater opportunities. He has the chance to earn the lead role in a wide open backfield. Although leading rusher Terrion Avery returns, he struggled mightily last season in a ground game that averaged merely 3.0 yards per carry.

• Lee Transfers in from Virginia Tech. He's a player who could make an impact this season for the Jaguars, remember the name!! pic.twitter.com/U76sNr8dGQ

McChesney fills in the shoes of the great all-purpose back, Tyler Allgeier. The implication is that the Cougars will start with a running back by committee, but don’t be surprised to see McChesney take over. Like Allgeier, he has the ability to gain tough yards, can be used in the read option, and is a capable pass catcher. McChesney has averaged 7.8 yards per carry over the course of his career.