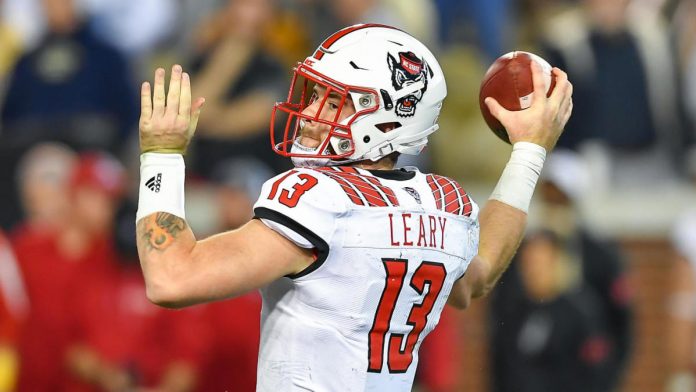 I will be a little vain this week and tip my cap to myself. Shockingly, I went 3-0 last week and I did not expect that at all. The difficulty to correctly predict the Week 10 games was very high, but I pulled through unblemished. The hardest one to predict was easily the North Carolina/Wake Forest game. Regardless of how you felt about this game going into it and regardless if you predicted a win or a loss, it lived up to expectations. For the second year in a row these two teams combined for over 100 points. Maybe this in-state rivalry should be named the “I-40 Shootout.” The Tar Heels got just enough stops to outlast the Wake offense by a thin margin.

Duke hung in there with Pittsburgh early on, but the legend of Kenny Pickett rose to the occasion and got the Panther offense rolling after the first quarter. Pickett racked up over 400 passing yards and 4 total touchdowns. Duke has now lost five in a row and continues to struggle on both sides of the ball.

NC State needed to beat Florida State on the road to continue to control their own destiny in the ACC Atlantic division, and that is just what they did. It was a tight game for most of it, but NC State QB Devin Leary remained calm and composed and did enough to lead the Pack to a 28-14 win.

Thanks to these three victories I now stand at 24-9 on the season with two weeks to go. Week 11 is no “gimmie” though and features three compelling games for me to ponder over.

“Now, where is that whiskey glass at? It served me well last week…”. I guess I will have to make my predictions without it, now watch me go 0-3 in Week 11.

Both the Panthers and Tar Heels are coming off of wins, but have completely different motives to win this game. The Tar Heels want to make a bowl game, the more they win the better bowl it will be, and they spoiled Wake’s perfect season last week. So the Heels want to continue to play spoiler. If your season falls short of expectations, the next best thing you can do is make someone else’s season fall short of expectations. For Pittsburgh, they have a very different thought process. Right now the Panthers are exceeding their 2021 expectations and have a very realistic shot at winning the ACC Coastal division and making the ACC Championship game in Charlotte. But motive doesn’t translate to wins though. What does translate to wins is consistency. That is why I am going to go with the more consistent team here… the Pitt Panthers.

Pitt has lost two games this year by a combined 7 points and even in those two losses Kenny Pickett was nearly spectacular (901 passing yards, 9 TD  and 3 INTs). UNC QB Sam Howell has looked really good in some games and in others pretty average. On any given Saturday I know which Kenny Pickett is going to show up. I don’t always know which Sam Howell is going to show up. For that reason, I am rolling with “Kenny Two Gloves” and the Pitt Panthers to get the win here.

Oh man, do I really have to pick this one? The Hokies and Blue Devils have both been less than unimpressive over the past month. Duke has lost five in a row, like I stated earlier, and Virginia Tech has lost four of its last five. The offense from both teams has been abysmal recently, so points are going to come at a premium in this one. But where will that offense come from? Like seriously who is going to score in this game?

I look to each teams’ running game for that answer. Duke RB Mataeo Durant is already a 1,000 yard rusher on the season and averaging 5 yards a carry. For the Hokies, they have used a committee for their running game with Raheem Blackshear and Malachi Thomas leading the way (both have over 350 yards on the season). I see a heavy dose of the run game from each team in this contest with a surprise victor….Duke!

Yes, I know you are asking yourself “Is he really taking Duke on the road at Virginia Tech? What an idiot!” Hear me out, though. Duke has the better running game and the better running back between the two squads. Yes, playing in Blacksburg is tough, but this is a 4-5 Hokie team who lost to Syracuse in Lane Stadium a few weeks ago. Currently, this isn’t the bouncing stadium to “Enter Sandman” that we are all used to. The lackluster atmosphere will play into Duke’s favor. Duke wins a low scoring close one.

Who would have thought that the ACC game of the year would be this one? That’s right. Not a Clemson Tiger in sight. The eyes of the ACC with be on Truist Field in Winston Salem Saturday night. There are multiple layers to this game that must be peeled back to realized how monumental of a game this is for each program.

Layer 1: The easiest to see, two ranked teams within the same conference division.

No matter what the rankings are, when two ranked teams meet, it is a big deal and even that becomes a little more special when those two teams are in the same conference division.

Layer 2: Winner is most likely going to represent the ACC Atlantic Division in the ACC Championship game.

Layer 3: NC State has only won once in Winston Salem since 2003.

Yup, that’s right, just one win for the Pack when playing at the Deacons home stadium in the last 18 years. Winston Salem has some sort of voodoo hex on the Wolfpack whenever they come to town. This was never more evident than in 2017 when Emeka Emezie fumbled at the goal line on what would have been the go ahead touchdown late in the 4th quarter. {Takes a deep sigh}… He was in by the way…{Cries}…Ok moving on….

Layer 4: Winner has the potential to be ranked with the Top 10 of the CFP.

The Tuesday after the completion of this game the third CFP rankings will be announced and the winner has a real shot at being in the Top 10. Wake achieved this feat a week ago when they were announced at #9 prior to their loss to UNC. This would be new territory for NC State, who has never been ranked within the top of the CFP.

Layer 5: Biggest game of Dave Doeren’s and Dave Clawson’s tenure at each school?

Have Dave Doeren and Dave Clawson been in big games while at NC State and Wake Forest? Of course the answer to that question is yes. But all of those games were one sided in the sense that their team was poised to upset a high ranked opponent. This one is different. There is a lot at stake for both team not just the potential for an unforeseen upset. Saturday night’s game has ACC Championship, New Year’s Six Bowl, and dare I say longshot CFP implications.

Wake Forest and NC State each have a unique identify and are two of the most consistent teams in the ACC. Wake Forest is built to put up points and outscore you. The Deacons have scored 35+ points in every game this season. Conversely, NC State is built to sustain long methodical drives, get a lead against the opponent and then grind them down.

The Pack and Deacs are lead by two solid quarterbacks in Devin Leary from NC State and Sam Hartman for Wake Forest. Their gameplay is different, but their stats are nearly identical. Hartman is a more explosive in the pass game, while Leary is an elite game manager. But this is a net zero in terms of who has the advantage here.

But one of these teams has had a chink in their armor exposed over the past few weeks. Wake Forest’s defense has been exposed primarily by the running game of their opponents. Going all the way back to the Louisville game Wake has been gashed by the run game. Just look at the rushing numbers that the Wake defense has allowed dating back to that Louisville game…

That is not just a one or two game fluke to give up those type of numbers on the ground week in and week out. I point this out because NC State has a dynamic running back tandem in Ricky Person Jr. and Zonovan Knight. These two running backs can gut the Wake Forest defense and allow NC State to control the clock and keep Sam Hartman and his stellar wide receivers on the bench. NC State’s ability to run the ball will expose Wake’s defensive weakness and lead to long sustained drives forcing Wake to change their game plan.

The NC State running attack will be the key to victory and lead the Wolfpack to winning in Winston Salem, for only the 2nd time since 2003, and will allow the Pack to continue to control their own destiny in the ACC.