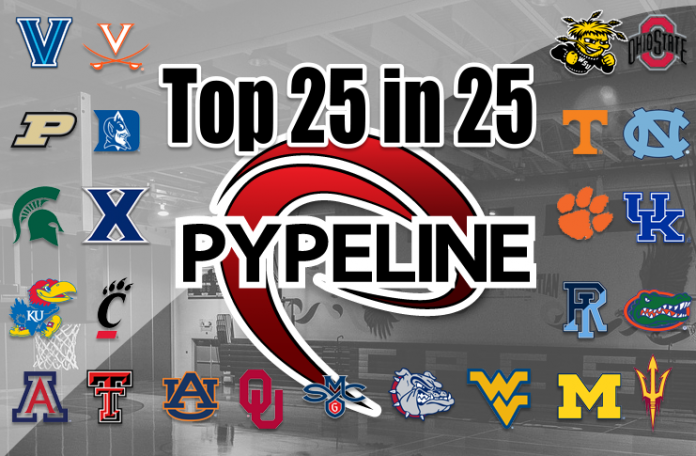 Catching up with the weekend’s Top 25 college basketball action in 25 sentences.

#2 Michigan St 65 Northwestern 60 – There are corpses with less of a flat line than Northwestern’s scoring graph in the 2nd half, as the Spartans had the biggest comeback (27 pts) in B1G history.

#3 Villanova 95 #4 Xavier 79 – The Wildcats were only -1.5 favorites at Xavier, but the favorites to cut down the nets blew the doors off the Musketeers, and still don’t have Phil Booth healthy. O.O Xavier has lost 10 of 11 to Nova, and really didn’t seem like they were ready for the bright lights of a Top 5 match-up.

#19 Wichita St 76 #5 Cincinnati 72 – After some tough/bad losses this year (Hello Temple!) the Shockers have appeared to right the ship and will be a tough out come March. After being undefeated in conference play last week, the Bearcats are now only a game up on the Shockers and still have to go to Wichita St for the last game of the season.

#6 Purdue 76 Penn St 73 – A top 10 team in both Adjusted Offense and Defense, the Boilermakers got a MUCH needed win, after dropping three B1G games in a row.

Baylor 59 #7 Texas Tech 57 – That sound was the sound of the Red Raiders opening the door and rolling out the red carpet for Kansas, as Texas Tech’s loss now puts the Big 12 title on the line when they face the Jayhawks this week.

#22 Michigan 74 #8 Ohio St 62 – The Buckeyes can expect a nice fruit basket from Michigan St (probably something from Harry & David (maybe even something with kiwi or mangoes!)), as they gave the Spartans control of the B1G with their loss to the Wolverines.  With it’s top 20 ranking in Adjusted Defense, Michigan is positioning itself for a second weekend run in the Dance.

South Carolina 84 #10 Auburn 75 – The Tigers suffered two losses: the loss to the Gamecocks & the loss of starter Anfernee McLemore to a horrific leg injury.

#12 Duke 66 #11 Clemson 57 – Rumors are starting to swirl that Marvin Bagley’s knee injury is possibly worse than originally thought, and he might consider shutting it down for the season. The Tigers tied the game at 57 with 2 minutes and didn’t score again for the rest of the game…results = poor.

#13 Kansas 77 #20 West Virginia 69 (Nice!) – Thanks to Udoka Azubuike (21 pts, 5 rebs, 3 blks), Kansas made it three straight games vs West Virginia in which they’ve overcome double digit deficits in the 2nd half. Head coach Bob Huggins hit the showers early, as he was tossed after being T’d up from being so upset over the Jayhawks’ 35-2 attempted FT discrepancy.

#14 North Carolina 93 Louisville 76 – All five starters scored double figures, including Luke Maye with 17 2nd half points, along with a +12 rebounding margin added up to a very impressive road victory for the Tar Heels.

#15 St Mary’s 73 Portland 61 – After going from undefeated in conference play to losing two games in a row, the Gaels got 23 pts & 10 rebs from Jock Lockdale to stop the bleeding and pull out a win vs Portland.

St. Bonaventure 77 #16 Rhode Island 74 – The Rams dropped their first conference game of the year when they embarrassingly lost to team nicknamed the Bonnies (Lol).

Arkansas 94 #21 Texas A&M 75 – Apparently, the Razorbacks are the kryptonite to the Aggies Superman, as A&M is now 0-5 vs Arkansas since joining the SEC conference.

Texas 77 #23 Oklahoma 66 – A headline we expect to see in a couple of weeks: BREAKING: Due to their late season slide, the Sooners won’t make the tournament, but the committee did, however, make Trae Young a 7th seed. 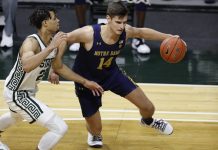 6’10” Center Silas Sunday picks up offer from the Illini