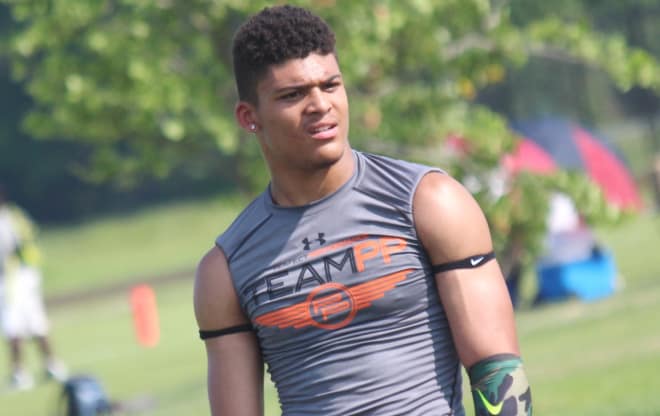 After a weird offseason that included guys committing and decommiting after only a few minutes, or committing when they didn’t have an offer, Virginia fans finally got some good news. Three-star S Chayce Chalmers committed to the Cavaliers. Here are his Junior year highlights:

Chalmers hails from Stonewall Jackson High School in Manassas, VA. Stonewall Jackson HS is one of only 12 schools to produce multiple draftees in this year’s NFL draft. So clearly it produces top level talent. Chayce is a 6’1″ 205 lb safety that has the size and physicality to play down on the line in run support. He has the strength to take on runners at the point of attack. However, he is also athletic enough to cover backs out of the backfield. Chalmers is the 29th ranked recruit in Virginia.

Great get for Bronco

This was an important get for Cavalier head coach Bronco Mendenhall. After the rash of weirdness that’s surrounded the program this year, it’s good to settle everything down and get solid recruits that can contribute. It’s also critical for Virginia’s future success to try and build a wall around the state for recruits and keep them from leaving for elsewhere. Chayce marks their 3rd recruit in this year’s class that comes from in-state.

Virginia is sneakily one of the most talent rich football states in the country. Florida, Texas, and even California are often hailed as the factory football states. And rightfully so, as a ton of talent comes from those states. However, consider that Virginia tied Florida for the most high schools (3) to produce multiple draftees for this year’s NFL draft (Dan River, Oscar Smith, & Stonewall Jackson). When you compare Florida’s population, 21 million, to Virginia’s population, 8.5 million, it becomes obvious that the talent from the Old Dominion state is rich and deep, and can hang with the best in the country.

Chalmers is a solid, strong player that will make the Cavaliers’ secondary better. He is just the type of recruit that excels under Bronco Mendenhall. A tough-nosed, no-nonsense player that isn’t afraid to mix it up and get his hands dirty. He is a ball-hawk that is a ball magnet. He’ll be able to play deep as a safety or with some weight training could potentially play as a hybrid off the line. The skies are getting brighter in Cavalier country, and that’s a welcomed sign for UVA fans.

PS – We are fully on board with /u/smellslikebadussy’s suggestion of giving Chalmers the nickname “Super Nintendo.”