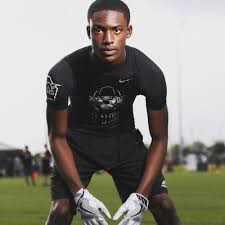 Cornerback Ken Montgomery Jr out of Florida announced that he will be deciding between Alabama, Ohio State, Penn State, and UCLA on July 27th. Montgomery is one of our top defensive backs out of the state of Florida in the 2018 class.

Montgomery is long for a DB and has great closing speed, which comes as no surprise from a player out of the Sunshine state. He will need to add a little weight, when he steps on campus as he is listed at only 155 pounds at 6’2″. We predict that this gem lands at UCLA, as they are still in the hunt for a corner this class and Montgomery would be a great addition for them. The Bruins would allow him more playing time, letting him contribute sooner rather than later. Once this kid does see the field, we can assure you that he will make the most of it. Stay tuned to see if UCLA can steal one from the heavy hitters or if he makes an already great class at PSU or OSU even better.