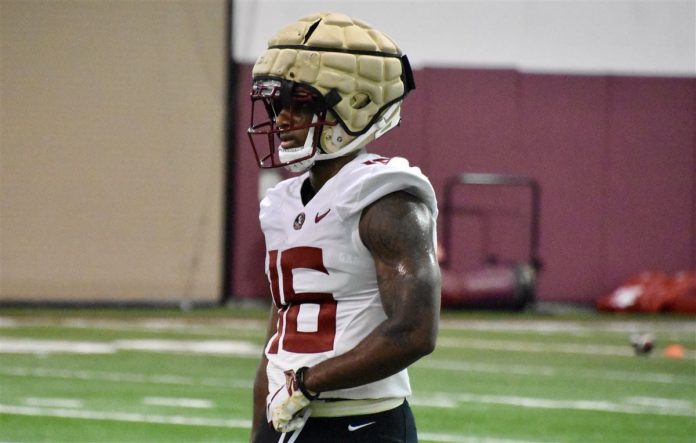 Basketball season is officially into the book and you know what that means…the mindset completely shifts to football. On average, ACC spring camps are a bit more than halfway through so let’s evaluate which players have emerged onto the scene during these practices.

Banks hasn’t been on the field regularly over his first two years on campus but the flashes he’s shown when he was has Wake fans thirsting for more. Aside from A.T. Perry, Banks had the highest average depth of target on the team in 2021, among anybody who saw meaningful snap counts. He has always been known for his ability to win contested catches downfield but his route running and speed have improved mightily in his days as a Demon Deacon. Banks looks to continue to compete for snaps in a loaded Wake Forest receiving room.

– I did not realize how close Sam Hartman was to the line of scrimmage.

– Evidence that I wasn't making stuff up about Jahmal Banks all camp. pic.twitter.com/POmaThvQJ5

The consensus top rated recruit in the state of Massashusetts, Kendall entered Boston College with high expectations. Of course, you probably are familiar with BC’s recent dominance at the offensive line position. Even with the departure of position coach Matt Applebaum and four standout starters, the reputation needs to be backed up.

Last year, Kendall redshirted behind the All-ACC Alec Lindstrom but he has been very impressive at center this spring. Teammates and spectators note how he has bulked up in the weight room and is improving his footwork at the same time. As we approach the season, look for the Eagles’ mostly new offensive line to continue to build chemistry.

"There's four open spots right now. Everyone's just coming into work every day just with that mindset to go get that job because there's no safe job right now. And there's a lot of good players behind us."

— BC C Drew Kendall on the O-Line position battle

Speaking of basketball being over, let’s head over to Durham, North Carolina where the football program is building from the bottom up. The quarterback room is one of many position battles yet to be settled. Reporters have been particularly impressed with Moore, who saw a bit of playing time in the Virginia Tech game last season. Moore definitely fits the “dual threat” mold the most and can really let the ball loose. Other candidates for the starting job are Riley Leonard and Luca Diamont.

The Oregon transfer enters the FSU program with three years of eligibility and a major opportunity to earn carries. If you take a quick look at Benson, you can tell he’s a bruiser at 6’0, 209 but the speed is certainly there too. As his health is improving, he continues to impress more and more in camp. Benson recently had his knee brace removed and looks forward to playing Saturday’s spring game with full confidence.

#FSU running back Trey Benson is explosive and moves to the second level with ease.

Solid hole made for him, too. #Noles pic.twitter.com/O1m9KTeiQ5

Minkins is another guy that did not have the highest snap count last year but has stood out these last few weeks. His behind the scene habits get raved about by the coaching staff. In the spring game, Minkins showcased his skillset in front of many more eyes, especially in run support. Louisville’s defensive backfield was plagued with injuries last year, including Minkins himself, and lack of depth hurt their performance down the stretch. The fully healthy and vastly improved safety will go a long way.

Watch out for Josh Minkins #5 this year. He is making a lot of plays on defense pic.twitter.com/HKSgxQ4h0P