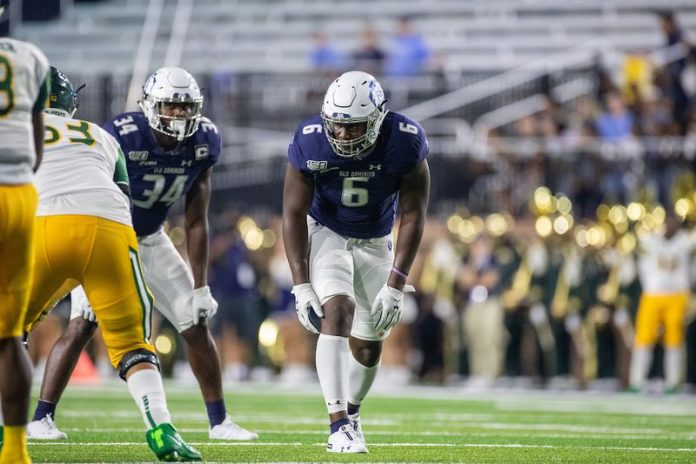 Georgia Tech’s young roster has experienced various growing pains during the transition to an entirely new scheme. Many will point to the talented but raw quarterback Jeff Sims. However, inconsistency on the defensive side of the ball has been equally prevalent.

The Jackets have had the ACC’s lowest overall pass rushing grade over the two year span that has commenced the Geoff Collins era. However, expectations are higher this year with more talent on the defensive front.

Jordan Domineck was a constant duress to opposing offensive lines and he will now have a capable piece beside him — Old Dominion transfer Keion White. White only recently switched to the defensive side of the ball. However, when he made the transition, he was very productive, leading Conference USA in total pressures in 2019.

Although he did not gain valuable experience last season, his potential has yet to be tapped. This feature breaks down his dominance in the 2019 season, most specifically against what is now coastal foes in Virginia and Virginia Tech.

White has an impressive feel for playing on the edge, considering his lack of experience at the position.

He is able to elude this undersized offensive tackle easily. A quick shove is all that is necessary to knock #70 off balance. As White starts to move towards the point of attack, he recognizes the quarterback keeper and hits full gear. Perhaps the most impressive part is the momentum he generates to apply a huge hit on the speedy Bryce Perkins.

His instincts to simply follow the ball resulted in a loss for the Hoos.

White is once again able see the tendencies in the offense and takes advantage. UVA ran several similar plays earlier where Perkins uses the halfback as a lead blocker in a play-action keeper.

White utilizes quick burst off the snap and completely blows up this play. He shoots the gap and does not allow the offense any time for the play to develop. Perkins is forced to run straight into traffic.

This is another play where White wins with pure power. No special pass rushing move is necessary — he just bullies the offensive tackle. Although, the play results in a completion, the fact that White is able to beat a 6’10” power conference lineman in that way says enough.

As soon as White engages with the offensive tackle, he already has him beat. There is room for improvement on his technique, but that is understandable. The main takeaway is his quickness off of the snap to gain leverage. Then, he has the strength to continue to drive the opposing lineman back. The pressure almost causes a critical turnover.

This play is pure speed and acceleration. Given the amount of momentum White is able to gain, the blocking back has no chance to even slow him down. As usual he is able to secure the tackle and finish the play. White finished the game with eight total pressures, three run stops, and a blocked field goal.

White is pushed behind this play but continues to go to work. Eventually, the quarterback, Ryan Willis, is forced up in the pocket allowing space for him to pick up the sack. The theme continues of White playing downhill with a high motor.

This is an underrated asset of White’s game. Keep in mind that as a former tight end, he is used to playing in space and covering ground. That is exactly what White does here, completely undercutting the flat.

White is obviously a bit raw, but the tools stand out. He has the less teachable traits — strength, instincts, and quickness.

Considering he has had time to develop in multiple programs for two years since these games, we may see a more refined White immediately at Georgia Tech.

The ceiling is limitless for this kid. Do not be surprised to see him continue to thrive against ACC competition and become a highly touted NFL draft prospect.