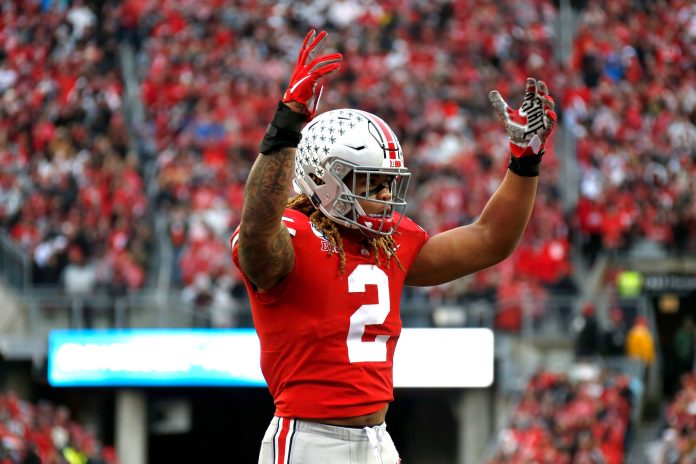 The Buckeyes jumped out to a 21-0 lead and held on late for a big win to keep them in the #1 spot. Chase Young was back and made his mark with a couple sacks. Up next is the biggest rivalry in sports, as Ohio State travels to Michigan for a shot at 12-0.

The Tigers took care of business vs the Razorbacks to get to 11-0. 12-0 will be on the line when Texas A&M comes to town this week. The Aggies won the 7OT thriller vs the Tigers last year in College Station.

Clemson got a bye week and held steady at #3. Up next is a sneaky trip to South Carolina. The Tigers should handle them to get to 12-0.

The Bulldogs didn’t win in the prettiest way, but they were just barely able to grab my #4 spot. Their 3 ranked wins were the key. Up next, the Bulldogs travel to Georgia Tech. However, the SEC Title vs LSU will decide if they make the CFP.

Utah dominated the Wildcats and clinched the Pac 12 South. The Utes are in line to make my Top 4 if they win out. Up next is a home game against Colorado, who is fighting for a bowl game at (5-6).

The Crimson Tide were able to rest starters vs WCU and get to 10-1. Up next is the big test at Auburn for QB Mac Jones. It must be a stellar performance to keep their CFP hopes alive.

The Sooners snuck out a win over TCU late to keep their CFP chances alive. They travel to Oklahoma State this week, as they try to add a quality win to their resume. Oklahoma likely needs Utah to fall to get in.

The Golden Gophers took care of business vs the Wildcats to get to 10-1 and set up a massive home game vs Wisconsin. College Gameday will be on hand, and the winner will head to the Big Ten Title Game vs Ohio State. The Gophers can still make the CFP if they win out and possibly get help.

The Bears handily beat the Longhorns to get their 10th win of the season. While their CFP chances are slim to none, they are very much in the running for a NY6 bowl game. Up next is a trip to Kansas to finish the regular season 11-1.

Penn State battled to keep it close, but came up short vs the Buckeyes. Two ranked wins and 2 Top 10 losses keep the Nittany Lions in the front of the 2-loss pack. They face Rutgers this week in State College and still have a shot at a Rose Bowl bid.

The Gators took a bye week to prepare for their rival Florida State this week. They have a solid shot at a NY6 bowl with a win.

Last Jump Around of 2019 has us in our feels #OnWisconsin pic.twitter.com/PTifUuUJoC

The Badgers took care of business to set up a Big Ten West Title game in Minneapolis. The battle for the Axe has never been so large. If the Badgers win, they could have a shot at the Rose Bowl.

The Wolverines pulled away late to beat the Hoosiers once again and are now 9-2. Up next is the big rivalry game vs the Buckeyes. Jim Harbaugh has yet to beat Ohio State and would love to pull the upset.

Down Go The Ducks! Justin Herbert struggled and threw some picks in the upset loss to the Sun Devils. Now the Ducks need to bounce back to beat their rival Oregon State. With their CFP hopes dashed a Rose Bowl bid is still in play.

The Irish took it to the Eagles to get to 9-2. Up next is a trip to the disaster at Stanford. There’s a good chance that the Irish end up at the Camping World Bowl for their bowl game.

The Memphis Tigers destroyed USF to keep a hold on their G5 NY6 bid, but barely, as other teams are nipping at their heels. Up next, the Tigers welcome Cincinnati for what could end up being a rematch in the AAC Title. The winner will step into that G5 leading role.

The Broncos made a statement beating Utah St by 35 and they move into that #2 spot for the G5 bid. Boise State faces Colorado St, but they may need Memphis and Cincinnati to both lose to get that bid.

The Bearcats have struggled as of late and last week needed a blocked PAT return to give them their 2 point win. Up next, is the massive trip to Memphis. They already have a spot in the AAC Title, but need this win for the G5 NY6 bid.

The Hawks defense continues to dominate opponents and the offense did just enough again to get the win. Up next, Iowa travels to Nebraska to get to 9-3 and a possible Holiday Bowl bid.

The Tigers took down an FCS opponent, but their big rivalry game against Alabama is this week. Auburn has the ability to knock Alabama out of the CFP picture and get a 9th win.

The Mountaineers may have lost their G5 NY6 bid chances, but took down Texas St to get to 10-1. Up next is a trip to Troy, before the SBC Title game. The Mountaineers should get a solid G5 opponent in their bowl game.

The Hokies took care of business and dominated Pitt to keep their ACC Coastal chances alive. The win set up a winner take all game at Virginia for the Coastal. Va Tech has won 15 in a row in the series.

The Cowboys may be down Spencer Sanders, but were able to pull out the close win vs WVU. Up next is Bedlam vs Oklahoma. Without Sanders, they will need a huge game from RB Chuba Hubbard.

Navy bounced back from their blowout loss to ND by taking down SMU. Up next is a trip to Houston and, depending on the Memphis/Cincy game Friday, the Midshipmen may have a shot at the AAC Title with a win.

It was a Crosstown Showdown… and USC wins! 💥@KedonSlovis broke the USC record for most pass yards in a single game with 515. AND @tswag03, @DrakeLondon_, @amonra_stbrown and @MikePitt_Jr all broke 100+ receiving yards. @USC_FB topped UCLA 52-35. ✌️ pic.twitter.com/KmOIBLwCgi

The Trojans took down the Bruins and end the regular season a week earlier than everyone else. USC posted an 8-4 record and the Holiday Bowl is a possible bowl landing spot.

The Falcons took care of the Lobos with ease to get to 9-2 on the year. Up next, Air Force faces a solid Wyoming team at home to get to double digit wins.

The Cavaliers took down Liberty by 28 points and set up a huge game at home for the Coastal Title vs Virginia Tech. They have lost 15 in a row in the series and would love to cap off the season with a win over the Hokies and a Coastal division title.

NFL Draft: Is Javonte Williams the Best Running Back the ACC...