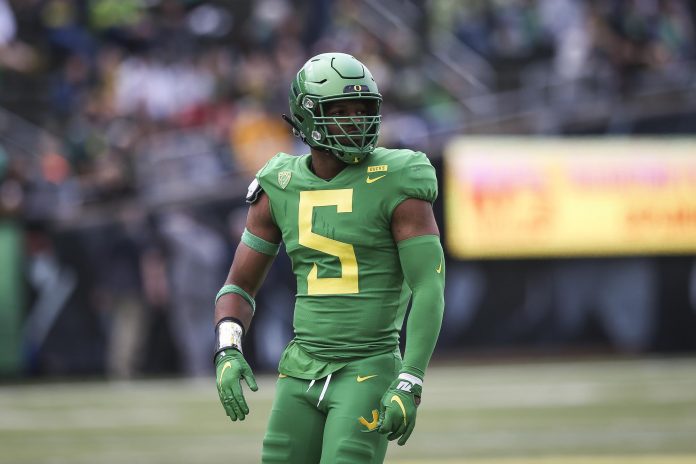 With offenses often putting up video game like numbers, it’s imperative for defenses to have playmakers to put the clamps on. These are players who are ready to do just that. Here are 28 potential breakout players on the D-line that are either under the radar or incoming true freshmen that have the chance to make a big impact for their teams.

Thibodeaux is a player I’m expecting big things from as a true freshman in 2019. The #2 overall recruit in 2018 has excellent size at 6’5″ 250 lbs to go with quickness and elite pass rushing abilities. A player like Thibodeaux will instantly make an impact on the Ducks’ defense and become a household name.

Last season as a freshman, Jordan Davis had 25 tackles and 1.5 sacks. He’s a big 6’6″ 320-pound DE who did well vs the run last season. This season his numbers will improve rushing the passer.

The next great Clemson DE will be Xavier Thomas. Last season as a true freshman, he had 43 tackles, 3.5 sacks, 10.5 tackles for loss, 2 PBUs and 6 QB hits. Those are some pretty impressive numbers for a true freshman. However, this season as a starter he should have an even bigger season. He could be known as the best DE in college football by season’s end. This season expect him to get 8-12 sacks.

Hutchinson is a player I expect big things from in 2019. He’s a player that will excel vs the rush and get to the QB. He’s 6’6″ 265 lbs and was a big time recruit who I loved coming out of high school. Remember the name!

Garbutt is a player poised for a huge 2019. Last season, he had 31 tackles, 1 sack, and 6.5 tackles for loss. Garbutt is a quick, elusive end who is finally growing into his body and filling out.

Williams is a big 6’2″ 300-pound sophomore who will make a name for himself this season. Expect him to make an impact vs the rush, and expect him to record a few sacks, too. If you haven’t seen a picture of him before now, you can see he’s quite the a physical specimen.

The 6’2″ 300-pound sophomore had 24 tackles, 3.5 sacks, and 5.5 tackles for loss last season. As a recruit, I was very high on McNeill and thought he had a ton of potential. He’s quick for his size and is also a former baseball standout.

Karlaftis was a huge 4⭐ pickup for the Boilermakers last season. A player like him will instantly come in and contribute. He’s 6’4″ 265 lbs and excels at rushing the passer. In a year or two, he will be the top DE in college football.

Coburn is a redshirt freshman who is poised for a big breakout season in 2019. He’s 6’2″ 340 lbs and I’ve heard big things about him this spring. Remember the name!

As a recruit, TCU got a huge steal when they landed Mathis. In 2019, expect a big breakout season from him. He’s a quick edge rusher who should get 6+ sacks and make a huge impact for the Horned Frogs.

Stills has the most upside of any player on the Mountaineers defense. He’s the type of player who can change the outcome of a game. He’s an extraordinary pass rusher who will have a huge season in 2019!

Booker was productive last season as a freshman. He had 28 tackles, 3.5 sacks, 4 TFL and 2 pass breakups. This season, expect him to get 45+ tackles and 6+ sacks.

Faumui is a player who is expected to be a big time pass rusher for the Hoos. Coaches have described him as, “He’s violent rushing the passer, very aggressive.”

Fox is a player who will take another step in his development in 2019. Last season as a freshman he had 27 tackles, 2.5 sacks and 8.5 tackles for loss.

Durden had 22 tackles, 2 sacks, 6 tackles for loss and 1 PBU in 2018. Everyone has been raving about him over the spring & summer. Expect the sophomore to have a memorable season.

Pinckney has patiently waited for his opportunity. This season as a starter he will get to showcase his skills. Last season he had 26 Tackles, 4.5 Tackles for Loss and 4 QB hits. This season I expect 35+ Tackles and at least 3 sacks

Avery was a big 4⭐ pickup for Lovie Smith in the 2018 class. Last season in limited playing time, he had 18 tackles and 1.5 tackles for loss. Avery has as much upside as any player on the team and will be known as a dominant run stuffer by season’s end.

Oweh is a redshirt freshman who is 6’5″ 250 lbs. He’s extremely quick and should be a force around the edge for sacks. Expect a big season from Oweh in 2019.

Brown, a former 4⭐ Recruit and 17th ranked DT in the 2018 class, is poised for a breakout season as a sophomore. He’s playing beside one of the best players in the country in Justin Madubuike, which will make things easier.

Last season as a freshman Tufele made an impact for the Trojans. He had 23 tackles, 3 sacks and 4.5 tackles for loss. He’s a player who has the ability to rush the passer with his strength inside.

Foster is a player that will take that next step in his game this season, as plenty of opportunities await him. Last season he had 17 tackles, 2 sacks and 6 tackles for loss.

Gooden totaled 33 Tackles, 1tsack and 7 tackles for loss last season. He found his way in the backfield quite often and created chaos for offensive linemen.

Sandidge, a former 4⭐ recruit, is a player that will have a big breakout season in 2019. Last season he had 19 tackles as a freshman. He’s a run stopper who will clog rushing lanes in 2019.

Byers is a player that is ready to burst onto the scene in 2019. Last season he had 20 tackles and 1.5 tackles for loss. This season Byers can get 3+ sacks and 35+ Tackles.

Golston was a solid piece of this D-Line for the Hawkeyes last season. He had 35 tackles, 3.5 sacks and 9 tackles for loss. AJ Epenesa & Golston combine for one of the better DE duos in college football.

Mafi is a player that will have a big season for the Bruins in 2019. Last season as a freshman, he had 17 tackles and 2 tackles for loss. Expect Mafi to be excellent vs the rush in 2019.