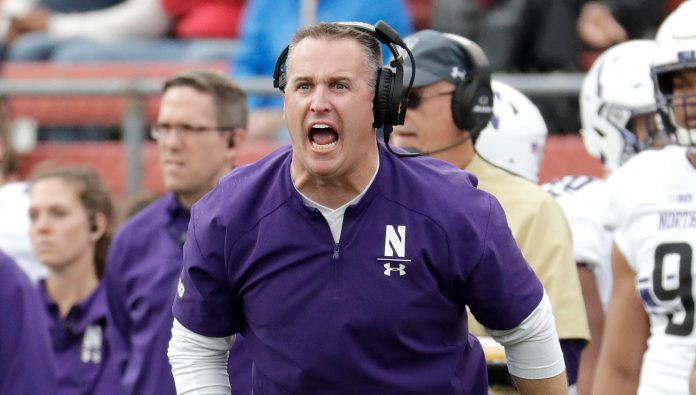 On August 31 Stanford and Northwestern kickoff on FOX in the official Week 1 of college football. Odds-makers and bettors seem to agree that Stanford should be favored by 6.5 points. We can tell this because the line opened and stayed at 6.5 across most books. I am shocked.

David Shaw enters his ninth year at Stanford and is joined by Tavita Pritchard (OC) as well as Lance Anderson (DC). This is Pritchard’s second year as the offensive coordinator and ninth year as an assistant at Stanford. Anderson has tons of experience as defensive coordinator and has been the coordinator at Stanford since 2014. As a home favorite under Shaw Stanford is 24-24 against the spread. Against Non-Conference teams Shaw is 15-14 against the number at Stanford. This is an above average coaching staff that is very familiar with the program. Under this coaching staff we should expect eight or more wins each season.

Stanford returns 4 starters on the offensive side of the ball including quarterback KJ Costello. Costello has quietly been generating buzz as one of the elite quarterbacks in college football. He had a stellar 65.1% completion % and is being tabbed as a possible first to third round pick come draft day. Unfortunately for Costello, he loses a lot of his big play-makers including JJ Arcega-Whiteside. Arcega-Whiteside was a second round pick by the Eagles. Stanford also loses former Heisman candidate Bryce Love as well as their #2 and #3 receivers. The offensive line will need to be rebuilt as well after losing three starters. With Costello back and an experienced coaching staff, I do not expect a ton of regression on an offense that averaged 0.444 points per play (33rd).

Stanford returns 5 starters on a defense that was average last season, ranking 49th in DFEI. Jordan Fox was the fourth leading tackler on the team last year from his outside linebacker position and should help lead this defense along with corner Paulson Adebo. This defense should remain similar to last season in terms of production.

Similar to Stanford, Northwestern has an experienced staff that is familiar with the program. Head coach Pat Fitzgerald is in his 14th season at Northwestern. Offensive coordinator Mick McCall is in his 12th season at Northwestern and Defensive coordinator Mike Hankwitz is also in his 12th season. Fitzgerald is a remarkable 24-9 against the number as road underdog over the past 10 seasons including 8-0 ATS over the past three seasons. The role that his Wildcats will be in on August 31st is a role that they thrive in.

The Wildcats offense returns six starters including their featured back Isaiah Bowser and three of their top 5 receivers. The biggest reason for optimism for the Wildcats offense is because of transfer quarterback Hunter Johnson. Johnson was the #1 quarterback recruit in the 2017 class who spent 2 springs and one fall at Clemson. This past fall Johnson had to sit out of game action due to the traditional transfer rules. If it had not been for Trevor Lawerence being a generational talent, it is possible that we would be talking about Johnson as the star of the defending national champions. In limited snaps as a true freshman, Johnson threw for 8.7 yards per attempt and completed 77.8% of his passes. He will be the real deal and immediately improve the Northwestern offense.

Northwestern returns six starters on the defensive side of the ball. Last year, the defense was above average, ranking 20th in DFEI. They lost their two starting defensive tackles that could set back the point of attack, but they do return their 5 leading tacklers. Blake Gallagher and Paddy Fisher will bolster a very strong linebacker unit. The Northwestern defense will not have the cats to be elite, but they will produce well enough to compete in every game.

I will be taking the Northwestern Wildcats at +6.5 and also sprinkling a little on the money line. Just about all of the boxes are checked in this match-up. The coaching edge is almost a push with both coaches having tons of experience and familiarity with the program. However, Fitzgerald is terrific as a road dog and Shaw is right around .500 in this spot. These teams had one common opponent last season in Notre Dame. Both struggled but Stanford was out-gained by 321 yards! Northwestern was out-gained by 215 to Notre Dame.

Offensively, both teams will have terrific quarterbacks. Costello is more proven, but Johnson can be just as good, if not better. Johnson will also have more to work with in terms of returning production. Defensively is where Northwestern should have the biggest edge. They return more production from a defense that was stronger than Stanford’s last season. I would make this game a pick-em. Getting 6.5 points and +money on the ML is a great bet!