The Crimson Tide continue to dominate on offense and got the bump over Clemson to the #1 spot this week. The Tide get a bye week, before a road game against Texas A&M.

Was it pretty? No. Was it a win? Yes. The Tigers D came up big in the end to stop the upset-minded Tar Heels, but some concern looms for Clemson. They get a bye week to rest up and fix issues, before the Seminoles of Florida State come to town.

The Sooners continue to roll on offense and the defense continues to look better than last year. Oklahoma should roll again this week when they play Kansas.

Boom! The Buckeyes smacked the Cornhuskers in Lincoln over the weekend and they are awarded a jump into the Top 4. Justin Fields looks incredible and the defense forced 3 INTs. This week Ohio State faces Michigan State, who could put up a little bit of a fight with their top level defense.

The Tigers got a bye week to rest and prepare. This week they face Utah State, who sits a handful of spots out of my Top 26. LSU defense would like to show some improvement against a solid offense from the Aggies.

The Bulldogs got a bye week after a tough game against Notre Dame. They should get pretty smooth sailing this week, as they face Tennessee.

Anyone want to face Chris Orr (@Chris_Guwap) and the @BadgerFootball defense?

The offense didn’t blow their opponent away last weekend, but the D got 2 TDs to help the cause. The Badgers will look to continue rolling as Kent State comes to town this week.

You really just never know how good Auburn is going to be. The Tigers are playing next level right now, but the schedule still includes four Top 12 teams. Up first is a road game in Gainesville this week vs Florida. Gameday will be there and it will be a real tough test for the Tigers.

No one expected 59-0. It was an impressive win all around for the Nittany Lions, who have now worked their way up 6 spots this season. This week they face Purdue at home, but a road contest vs Iowa looms in 2 weeks.

Guess who's back… back again… @shwaggyj's back… tell a friend…

The captain's third sack of the day sets up Ade Ogundeji perfectly for the scoop and score.

It looked like it was going to be a close down to the wire finish, until the Irish D forced a couple turnovers that lead to scores in the second half. They stay in the playoff debate, but will need some help. Up next is a home game vs Bowling Green after two tough games.

The Longhorns got a bye week and stayed put at 11. This week they travel to Morgantown to avenge the loss from last year, but this years WVU team isn’t quite like last year’s. Texas should handle them this time.

The Gators took care of another FCS opponent last week. This week it gets much tougher with a huge home game against Auburn. Both teams have tough games left and cant afford to lose this early. Should be a fun one in Gainesville.

The Hawkeyes rolled to victory vs the Blue Raiders, but the road gets tougher. This week they travel to the Big House to face a Michigan team that has concerns to say the least. Iowa can pick up a quality win here.

The Huskies continue their bounce back run after the loss to California and last week they beat the surging Trojans. Washington needs to keep it rolling if they want a shot at the playoff still. This week they face Stanford on the road.

Utah got a big bounce back win at home vs the Cougars. The defense played very well vs the high scoring passing attack of Mike Leach. The Utes have a bye week this week, before traveling to Tempe for a showdown with Arizona State.

The Ducks got a bye week last week, but this week face the Cal Bears at home. Cal has a tough defense that will keep it close, but Autzen Stadium should give the Ducks an advantage.

The Broncos got a bye last week and this week travel to UNLV. They are looking to push for the G5 NY6 spot and should have solid shot if they can stay unbeaten. I predicted them to go 12-0.

It was a close one, but the Deacs snuck out a W last week. Wake Forest is playing really well right now behind QB Jamie Newman and that solid WR core. Up next? A bye week to gather themselves before Louisville comes to town. Could the Demon Deacons get to 8-0 before they play Clemson?

Memphis took down a tough Navy team in a Thursday game last week. The option isn’t easy to stop, but the defense got some stops down the stretch to help get the W. Up next is a trip to ULM, as they look to stay on track, before a big trip to Temple.

The Wolverines needed a game to re-calibrate the system. But was it enough? Michigan will find out this week when the undefeated Iowa Hawkeyes come to town. A loss would have fans all over Jim Harbaugh.

Is it the 1980s? SMU is rolling over opponents right now and rolling right into the Top 26! Up next is a home game vs Tulsa to move to 6-0. Still left though are games vs Temple, Memphis and Tulane.

Baylor looked really good on the defensive side of the ball despite almost losing late. They won their first test, but the next one comes on the road this week vs Kansas State. We will see if the Bears can continue to show they deserve a Top 26 spot.

The Knights rolled past UConn as expected and jumped back into my Top 26. This week is the big one. Road game at Cincinnati. The Knights can’t afford to lose this one, with conference and NY6 implications riding on it. Nippert Stadium will be rocking Friday.

That was really close. The Spartans almost were upset by the Hoosiers, but pulled it out at the end with a big FG and then a fumble recovery for a TD as time expired. This week the Spartans must get 150% from their D and hope the offense can score enough on the road vs Ohio State.

The Mountaineers offense has been scoring points in bunches, but the defense is struggling. They are allowing 30 points per game, which needs some work. The good news is they have a bye week this week. Also, their win over North Carolina looks a little better, after the Tar Heels almost upset Clemson.

Minnesota finally looked more like the team we expected this year. Tanner Morgan completed 21/22 passes to lead the way. Up next is Illinois, but looking ahead the Golden Gophers could be 8-0 by the end of October. 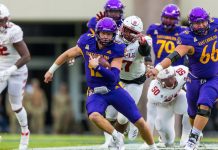 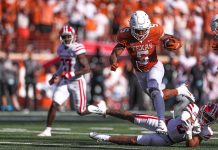 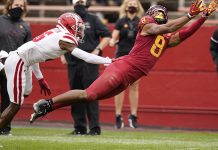 Can Syracuse Continue its Recruiting Momentum this Weekend?