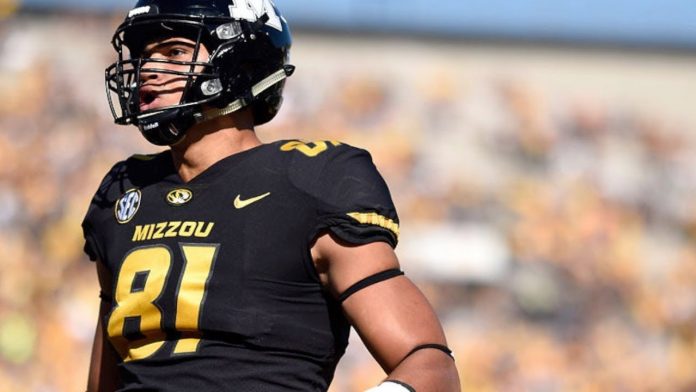 The tight end position can be a source of major mismatches in college football. They can boost offensive lines for the running game and can make the receiving corps go from good to elite. These are the Top 25 tight ends in the country for 2019.

Okwuegbunam is who you think of when you think of an elite TE in college football. Last season, he caught 43 passes for 466 yards and 6 touchdowns, averaging 10.8 YPC. In 2017, he had 11 receiving touchdowns. Okwuegbunam is one of the most physical tight ends in the country. He uses his size and strength in the red zone for touchdowns, and blocking for the rushing attack.

Vanderbilt has one of the best all around TEs in college football. Pinkney was only one of two TEs in 2018 with 50 catches and a 15+ YPC average. Pinkney thrives in the passing game because of his agility and ability to rack up yards after the catch. For someone as good as he is in the passing game, he’s also an above average blocking tight end.

Stanford is a tight end factory. And the next one that will head to the NFL is Parkinson. I have Parkinson ranked 3rd nationally, but he’s possibly the most talented and has the best NFL potential of the top three. He’s the leading returning receiver for the Cardinals, after he hauled in 29 passes for 485 yards and 7 touchdowns last season.

Calcaterra had a big season in 2018, catching 26 passes for 396 yards and 6 touchdowns, averaging 15.2 yards per catch. This season I wouldn’t be surprised to see him top 600+ receiving yards as he becomes an even bigger factor in the offense. Calcaterra is an extremely athletic guy who excels in the passing game. In 2019, I’m hoping to see an improvement in his run blocking.

Hopkins is the second leading returning pass catcher for the Boilermakers in 2019, only behind Rondale Moore. Hopkins is one of the best pass catching TEs in all of CFB and an excellent route runner. At 6’5″ 250 lbs, Hopkins’ size and athleticism causes problems for linebackers and smaller DBs.

Freiermuth had an outstanding season last year as a freshman. He caught 26 passes for 368 yards and 8 touchdowns, averaging 14.2 YPC. He’s an outstanding athlete who is one of the best pass catching TEs in college football. He uses his size in the red zone to get open. Don’t be surprised if Freiermuth tops this list next season.

Bryant has been hampered by injuries in his career. But when he’s healthy, he has a lot of upside as a pass catcher. At 6’2″ he isn’t the biggest tight end, but he has unreal athleticism and quickness. Bryant is a deep play threat at TE, and if a linebacker is lined up on him it won’t be pretty for the defense. Last season Bryant averaged a stellar 21.6 yards per catch.

Bryant is the leading returning receiver for the Owls in 2019. Last season, he caught 45 passes for 662 yards and 4 touchdowns, averaging 14.7 yards per catch. Run blocking, pass blocking, pass catching, Bryant can do it all. He only dropped one pass last season and is arguably the most underrated tight end on this list.

Ferguson was a reliable target last season, and a security blanket for QBs Alex Hornibrook and Jack Coan. He caught 36 passes for 456 yards and 4 touchdowns. His route running skills are what really jumps off the tape. He’s only a sophomore, so don’t be surprised to see him in my Top 5 next season.

Last season, O’Grady caught 30 passes for 400 yards and 6 touchdowns, averaging 13.3 yards per catch. His numbers could’ve been much better if the Razorbacks would’ve targeted him over the middle more instead of outside the numbers. He and Hudson Henry will combine for one of the best TE duos in all of college football in 2019.

I have Jordan ranked at 11 based on his potential talent. By season’s end, he could be a Top 5 tight end, if he stays healthy. Before going down with an injury last season, Jordan had 32 catches for 287 yards and 4 touchdowns. He’s one of the most talented TEs in CFB, and if he can get good QB play he will have a big season in 2019. Remember the name!

Bushman is the leading returning receiver for the Cougars in 2019. Last season, he caught 29 passes for 511 yards and 2 touchdowns, averaging 17.6 yards per catch. Bushman also excels at blocking. At 6’5″ 250 lbs, he’s a big weapon for BYU who has sure hands. He only dropped one pass last season.

One of the best TEs in CFB with one of the best names, Magnifico caught 21 passes for 363 yards and 5 touchdowns last season. While he’s a big target catching the ball, he also opened up a ton of holes for the rushing attack. What I love about Magnifico is his hands. He had 0 drops in 2018.

Rice was quietly one of the best tight ends in college football last season. He caught 55 passes for 664 yards and 3 touchdowns, making him the leading returning receiver for the Bulldogs in 2019. The best part about Rice is he can catch the deep ball or turn a short yardage catch into a big play.

Keene, often referred to as Rambo Keene, is one of the best all around TEs in CFB. He’s one of the best blocking TEs in the nation, but also excels in the passing attack. He caught 28 passes for 341 yards and 2 touchdowns last year. Keene hauled in 84% of his passes last season, but most were near the line of scrimmage. In year 3, expect the Hokies to open up the playbook even more for Keene.

I’ve enjoyed watching Wilcox the past few seasons. When he gets the ball, he can run defenders over. He’s extremely physical, which helps his blocking as well. In 3 seasons he has 72 receptions for 976 yards and 6 receiving TD’s.

Last season, Breeland caught 24 passes for 377 yards and 2 touchdowns, averaging 15.7 yards per catch. Breeland only dropped one pass last season. However, he needs to improve his blocking skills. 2019 should be a big season for him. Expect at least 5-8 touchdowns from him with Justin Herbert at QB.

Deguara was a very productive pass catcher last season, hauling in 38 passes for 468 yards and 5 touchdowns. He also helped establish the rushing attack with his blocking, which led to 1,329 rushing yards by RB Michael Warren.

Stoll had a big season in 2018, catching 21 passes for 245 yards and 3 touchdowns. I love the way Scott Frost utilized Stoll in the offense and made him a priority. Don’t be surprised if Stoll catches 35+ passes this season.

Davis was a huge pickup for the Yellow Jackets. The UConn transfer had 22 receptions for 237 yards and 6 touchdowns last season, averaging 10.8 YPC. It’s pretty exciting for Georgia Tech fans to see them have a big time player at TE again.

McKitty has been a reliable option at TE for the Noles. Last season, he caught 26 passes for 256 yards and 2 touchdowns. The 6’5″ junior will be an excellent safety valve for James Blackman in 2019.

I have Cupp ranked at 23 based on talent and potential heading into the season, but he could be a Top 10 TE by season’s end. Cupp is a big athletic 6’6″ TE who is just a freshman. Jimbo Fisher utilizes the tight ends extremely well and Cupp will benefit from that. This season expect him to catch 5+ touchdowns.

I have Pitts at 24 based on talent and potential heading into the season. Pitts is a freakish athlete for a tight end. He’s 6’6″ and has good speed. He will create nightmare match-ups when he’s on the field. By the end of the year, he will be a household name.

Ricci was the best TE in the MAC last season. He’s a big part of the Broncos’ offense, and last season he caught 35 passes for 392 yards and 3 touchdowns.

Why I Am Joining Pypeline