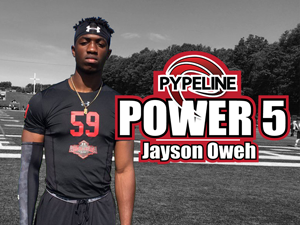 1. Obviously you’ve been heavily involved in your recruiting with Notre Dame, Ohio State, and Penn State. Are you looking to hear from any other schools?

Those are my Top 3. I’m not really looking to hear from anybody else, but if a school tries to come in that I’m interested in then maybe, yeah. But no school specifically.

2. Do you have a timeline or a commitment date in mind?

Me and my family are looking to schedule something. It could be early as next month in August. Or it could be a little later on.

3. When you were at The Opening, they had you competing at Tight End. Are there any schools that are talking to you about possibly playing TE?

Wisconsin and Pitt were. The schools in my Top 3 said it was a possibility, but they are mostly looking at Defensive End. I’m perfectly fine with that. Defensive End is where I’m most comfortable at and I think I can excel there.

4. Are there any other recruits from Notre Dame, Ohio State, or Penn State that are trying to get you to come to their school?

5. If you could be one superhero for the day, who would it be and why?

Who would I be? Hmm… I’d be Batman. That’s who I’d be. I like his ominous behavior. He doesn’t really have powers, but he still finesses everything. I like that. If he retires, I’ll look after Gotham.