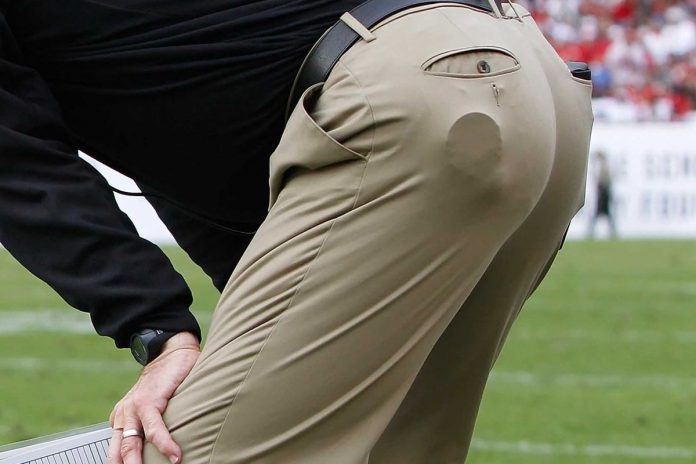 Recently, at the University of Michigan’s end-of-season awards banquet hosted by the U of M Club of Detroit, the Wolverines decided to auction off one of the most iconic pieces of fashion in today’s college football landscape: an autographed pair of Jim Harbaugh’s khakis. The bidding was to start at $900. The only teeny tiny problem? No one bid on them.

Which is strange, because who wouldn’t want another man’s pair of used pants that possibly reek of manliness? All of this got us thinking- what are some other items from coaches around the country that could be put up for auction?

Never skip leg day and want to show off the tree trunks? What could be a better way than a pair of Alabama’s head coach Nick Saban’s deck shorts? Shorts that leave little to the imagination. Especially in the inseam area. Either way, you’ll be the fashion hit of the yacht club.

Dan Mullen busted onto the Cool Kid scene a while back when he busted out a a pair of Yeezys. Now, he has so much street cred that he has to keep the extra in a Ziploc bag. We’re not really sure what that means, but then again, we’re not a part of the Cool Kids Club. Also, they come with a complimentary pair of Odor Eaters.

Pick these up in an auction and you’ll be smoother than the other side of something that’s really smooth. You’ll be slip sliding into the DM’s of the ladies ages 25-46. Now, obviously you won’t have as much game as Freshwater himself, but you can dream, can’t you?!

A pretty penny would the all-purpose shirt of LSU Tigers’ coach Ed Orgeron fetch. So many uses for such a finely made piece of cloth. It can survive the heat of the Bayou, a Gatorade bath, and a profuse amount of sweat. It goes well with almost any wardrobe choice. Also, it’s resistant to gumbo stains.

From Sears’ Get Off My Lawn collection, Duke head coach David Cutcliffe’s tweed jacket’s versatility is its middle name. Wear it on a recruiting trip. Wear it to a funeral. Wear it to an evening out at Red Lobster. Wear it to the country club. Wear it while arguing with the manager that you deserve 20% off your bill because the service was lousy. Just so many uses.